​”I was diagnosed with depression and anxiety at 17, at 19 I went to university. There was one suicide attempt in my first year, I was taken into hospital by an ambulance but the hospital psych massively overlooked me and I was left alone to deal with my emotions. A year later I was really struggling, my partner took me to my GP and I was given an immediate referral to my local mental health services. I was there for an hour before the duty nurse told me she thought I had BPD, that’s all it took…an hour for someone to actually ask questions and really listen to what I was saying. Although I wanted help I did not want the diagnosis and it was really hard for me to deal with, in the weeks that followed I tried taking my life around five times, this is when things got really serious. I was on drips for days at a time to save me from various amounts of poison. I was spilling out of control and nobody could help me, there was no way I could help myself.

Doctors and the crisis team were visiting me at home every couple of hours. Through out conversations they decided it was for the best I was admitted to a psych hospital. I agreed to go voluntarily so I wouldn’t have to be sectioned, they said they would be in touch when they had a bed. I wasn’t expecting it to be at 11:30 that night. My partner and I were in bed, my phone rang and they said I needed to go. I quickly packed and bag and my parents picked us up and drove us there. It was horrible being left behind, waking up the next day and realising I was actually in a psych hospital, I was terrified to get out of bed or do anything. A nurse came and brought my medicine and managed to coax me outside to eat something.

I began to relax, this really wasn’t as scary as the films made it seem. However thins were tough, I had no fight. I went back to my room and tried to hang myself. The rooms were fool proof, nothing would allow me to harm myself. A week later I’d decided I had enough and discharged myself.

I wanted to stay in the city my university was in but 2 weeks later my parents collected me and took me back to the south west. A week at home and another suicide attempt, this time I was taken straight to a psych ward and put on a section 2. It was horrible, a really unpleasant environment and I did not want to be there. I tried climbing fences, jumping on roofs, kicking doors, screaming, fighting. There was no way I was getting out of there without getting well.

So I put all of my fight into that, I began to eat, take my medications (they can’t force you to on a sec 2) I did everything I could to convince them I was okay. And eventually I began to feel okay, even though just days before I felt that nothing was or ever would be okay again. That was 7 months ago, I know it is possible and also very likely that I will relapse again, but two months ago I moved in with my boyfriend. We adopted a little dog that has special needs so she needs lots of love.

I regularly talk about all the things I’ve mentioned here.I will always talk to anybody that is ready to fight but needs a back up for when they can’t, I will fight for you💕” 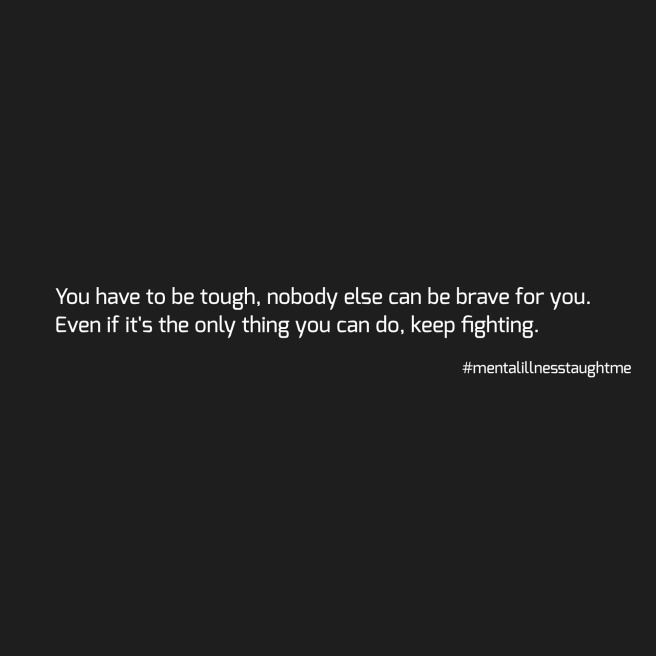 View all posts by mentalillnesstaughtme